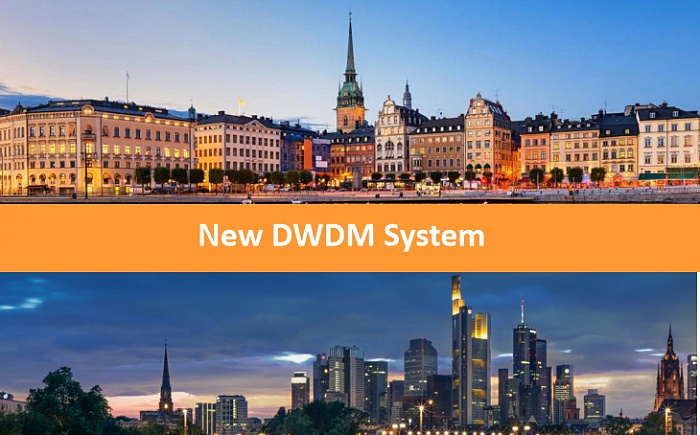 RASCOM Has a New DWDM System

RASCOM has brought into operation the second DWDM system on the route Stockholm – Frankfurt. The project was implemented on the basis of advanced Ciena’s equipment WaveLogic Photonics with Flexible Grid option.

The new system launching has increased the bandwidth by a factor of almost 2.5, so the total bandwidth of two lines on the direct route Stockholm – Frankfurt grows up to 21.6 Tbps.

The new DWDM line, which is built with the most advanced equipment of the latest-generation, has extended essentially RASCOM’s opportunities in service delivery by creating a significant reserve of capacity on this route. For many years to come company’s Customers will be provided with opportunity to lease high speed data communication circuits, data transmission rate of which is 400 Gbps on the single wavelength in this commercially successful direction. Moreover, due to a new point of presence added to the new route RASCOM can organize channels to Hamburg on its network now.

Building of the new DWDM system is a successive step of the strategy of bringing the latest-generation equipment into the network structure. The previous steps of this strategy were building of two additional systems in the network section between St. Petersburg and Stockholm in 2018 and 2019 (RASCOM news dated 10.06.2019). Now RASCOM can provide the circuits on the route from St. Petersburg to Frankfurt on the basis of the new DWDM systems.

“RASCOM and Ciena have been partners for many years. The first project by our companies was building of the part of the network that goes along the backbone of Oktyabrskaya Railway on the route Moscow-St. Petersburg in 1994,” - General Director Denis Aleksandovich Ganza comments on. “At that moment it was a leap-ahead project organizing the first fibre-optic communication line on the territory of Russia. Today there has been built 3 alternative hi-tech DWDM systems total capacity of which is 52,8 Tbps on the basis of which there is an opportunity to provide channel capacity with the unique RTD that is 7.09 ms. By using railway infrastructure RASCOM is operating on the shortest route that connects two Russian capitals. The company's network has been developing and modernizing during all these years but the vendor has never changed. This owes to the fact that Ciena is one of the leading developer of network strategies and technology that keeps improving our network as well as RASCOM's business generally in a successful and quality manner.”

“As a leading provider of international connectivity services, Rascom’s decision to launch a new network between Stockholm and Frankfurt will enable telecom carriers in the region to power next generation applications that require significant amounts of high-performance bandwidth,” -  said Andrey Ugorelov, Ciena’s Senior Manager of Sales.